DISAPPOINTMENT CAN BE A SPRINGBOARD TO AN AMAZING FUTURE. LOOK FOR IT, GILLIAN DID.

At 3 Gillian became addicted to challenge and adventure. At 10 she became addicted to making a difference in the lives of others where she could and did so for 60 years. At 61 she was a contestant on the TV show Survivor which turned into the springboard which would catapult her into an unexpected future.

She turned the disappointment of being eliminated from Survivor after 6 days into making a difference in the lives of many through fundraising, speaking and community involvement. She created Reality Rally raising funds for cancer support services and collaborates with other nonprofits. She does inspirational speaking engagements highlighting persistence and self-belief for all ages.  To connect with Gillian, her email address: Gillian@realityrally.com or gillianlarson020@gmail.com 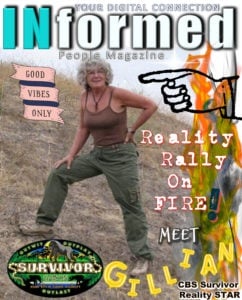